​L.Ac. Zhengyang (Charlie) Liu graduated with a Masters in Acupuncture from MCPHS University in Boston, MA. ​

Charlie worked at the People's Public Hospital of Dushanzi for several years; he met with and treated 50 patients per week.

At the hospital - Charlie specialized in neck, shoulder, waist and leg issues or injuries. He also helped many people with general pain management as well as those who were in the process of recovering from a stroke or other traumatic event.

​​​​Charlie has helped people with issues of insomnia as well as emotional concerns such as anxiety and depression. ​
​​​​​
In 2021, Dr. Liu conducted his own personal study on Knee Pain. The severity of the pain varied among each patient (acute or chronic).  The study proved successful in that the majority of the patients reported pain relief and better range-of-motion after receiving 1 treatment session per week for 8 weeks  of TCM (Traditional Chinese Medicine). The majority of the patients said that they would like to continue the TCM treatments at the conclusion of the study.

The style and technique Dr. Liu uses are both Chinese and Japanese style acupuncture. He will use herbs in conjunction with acupuncture. If necessary, Dr. Liu will use moxa and electro needling as well to further enhance the healing process.

​Dr. Liu speaks both English and Chinese Mandarin. He is in the process of learning Spanish.

Charlie is a licensed TCM doctor in China as well as a licensed acupuncturist in New York, Wisconsin, Nebraska, and North Carolina.

Outside of the clinic, Charlie likes to travel, go camping / hiking, watch movies or a concert and enjoys photography. 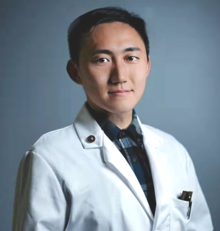 Zhenyyang Liu holds a Bachelor of Medicine degree from Tianjin University of Traditional Chinese Medicine in China and a Master’s degree in Acupuncture and Oriental Medicine from MCPHS University, Worcester, MA

View on Mobile
Acupuncture at EBOM Evidence Based Oriental Medicine